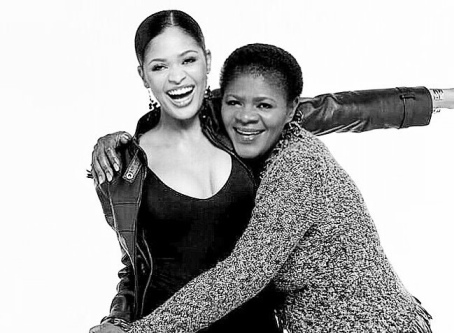 Actress Lerato Zah Moloi has brought us all into tears after sharing a touching tribute to her late mother Sarah Moloi.

It has been more than a year since her passing and since then, his actress has been vocal about missing her. The former Muvhango actress succumbed to cancer at the age 67 in 2020.  In a tribute video, Lerato shared beautiful memories she created with her mother and said she will not stop hurting. The day was emotional for her, but she wiped away her tears and wrote her a sweet message, hoping heaven receives it.
"As I post this, the time is just after 18h00… My beautiful Mama Candy transitioned to the other side within this hour, on this day, two years ago… it’s been two years but it still hurts like it happened a few minutes ago… I don’t think it’ll ever stop hurting but I’ve learnt to live with this numbing pain… This was her favourite song."
She shared her mom's favorite song, saying she's grown to love it since it reminds her of all the times they spent together.
“Beautiful In My Eyes” by Joshua Kadison. Ma, taught me the lyrics to this song when she played it for me the 1st time and almost daily after then we would play it on full blast in the car maybe 10 times before giving other songs a chance… (I was in primary school then)… It has become one of my favourite songs too because it reminds me of the fondest memories that we shared together… I hold on to those memories dearly… I guess that’s all we can do when we lose the loves of our lives… hupfi, memories don’t die like people do… Nwa-Hadzhi, edela zwakanaka Soni ya Mbelengwa… Muzukulu wa Sena… My love for you knows no bounds nor end my Queen," she wrote.

At her mother's memorial she said her mother fought throughout her life, "She fought like a trooper. She tried her best, but in the end she was really tired of fighting. My mother fought throughout her life. What pains me the most is she never got that break. She was always fighting through life, working through life. Always doing something for other people ... She gave and got nothing in return."