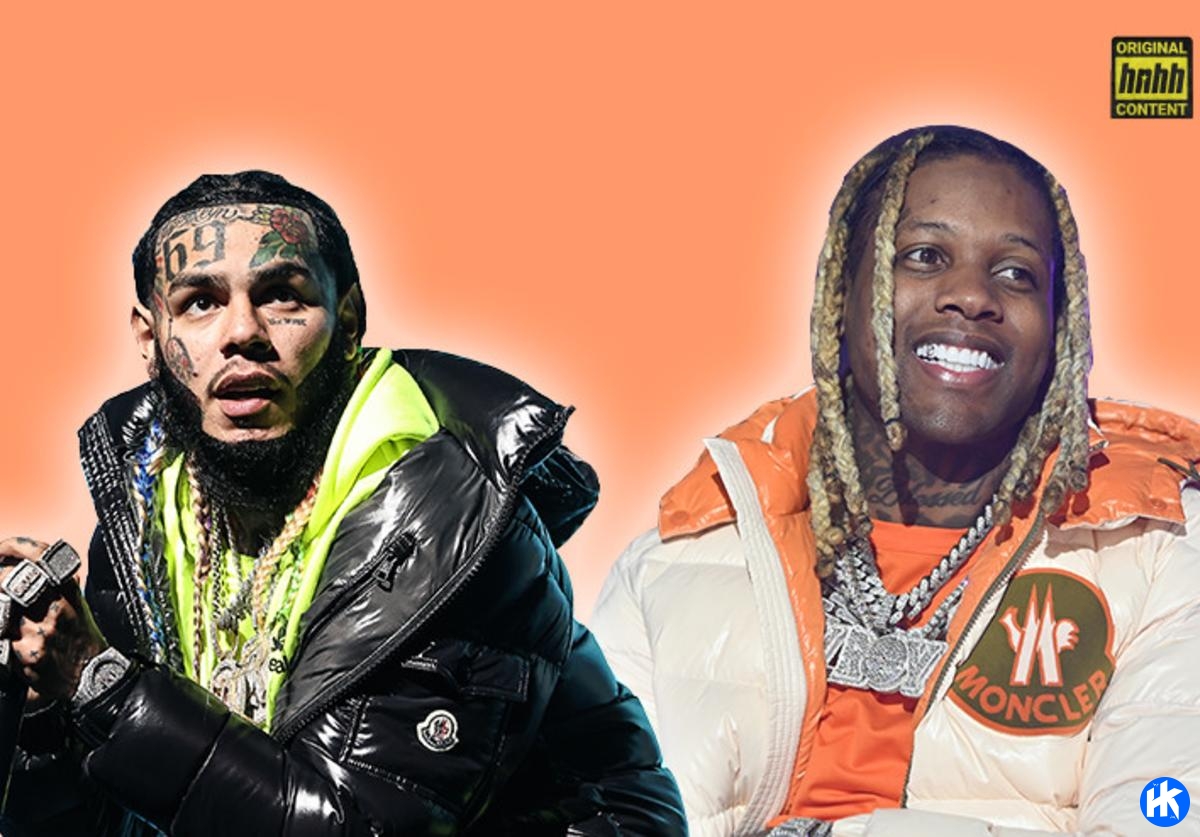 Here’s everything we know about the beef between 6ix9ine and Lil Durk.
Daniel Hernandez, professionally known as 6ix9ine, took the rap game by storm back in 2017. He first began trending on social media platforms thanks to his abrasive yet melodic scream-rap music videos, often featuring anime. His unique rainbow hair and grills helped turn the rapper into a meme, which in turn, brought even more attention to his music. 6ix9ine quickly realized the power of the meme in the process, and fashioned himself as hip-hop's number one troll. However, following his lengthy trial against members in his former crew, Nine Trey Gangsta Bloods, 6ix9ine’s career took a drastic turn.
In a situation that even the judge referred to as “game-changing,” 6ix9ine snitched on his crew and made a deal with the prosecution in 2019, resulting in a two-year prison sentence. What’s more, due to the COVID-19 pandemic, the rapper was released early, allowing him to finish out his term in home confinement. 6ix9ine’s unusual deal with the prosecution is ultimately what led to the New York rapper’s increased amount of hate from the rap community at large, as he openly broke the streets’ cardinal rule, and proceeded to flaunt it, too.
Now, as the rapper continues to rebuild his presence in the rap game, reemerging in the public eye with new music and a reinvigorated social media presence, 6ix9ine has also decided to also reignite his beef with Lil Durk, taking frequent shots at the Chicago-born rapper as of late.
But how did this beef come to be? Let's break it down.
6ix9ine and Nine Trey Trial 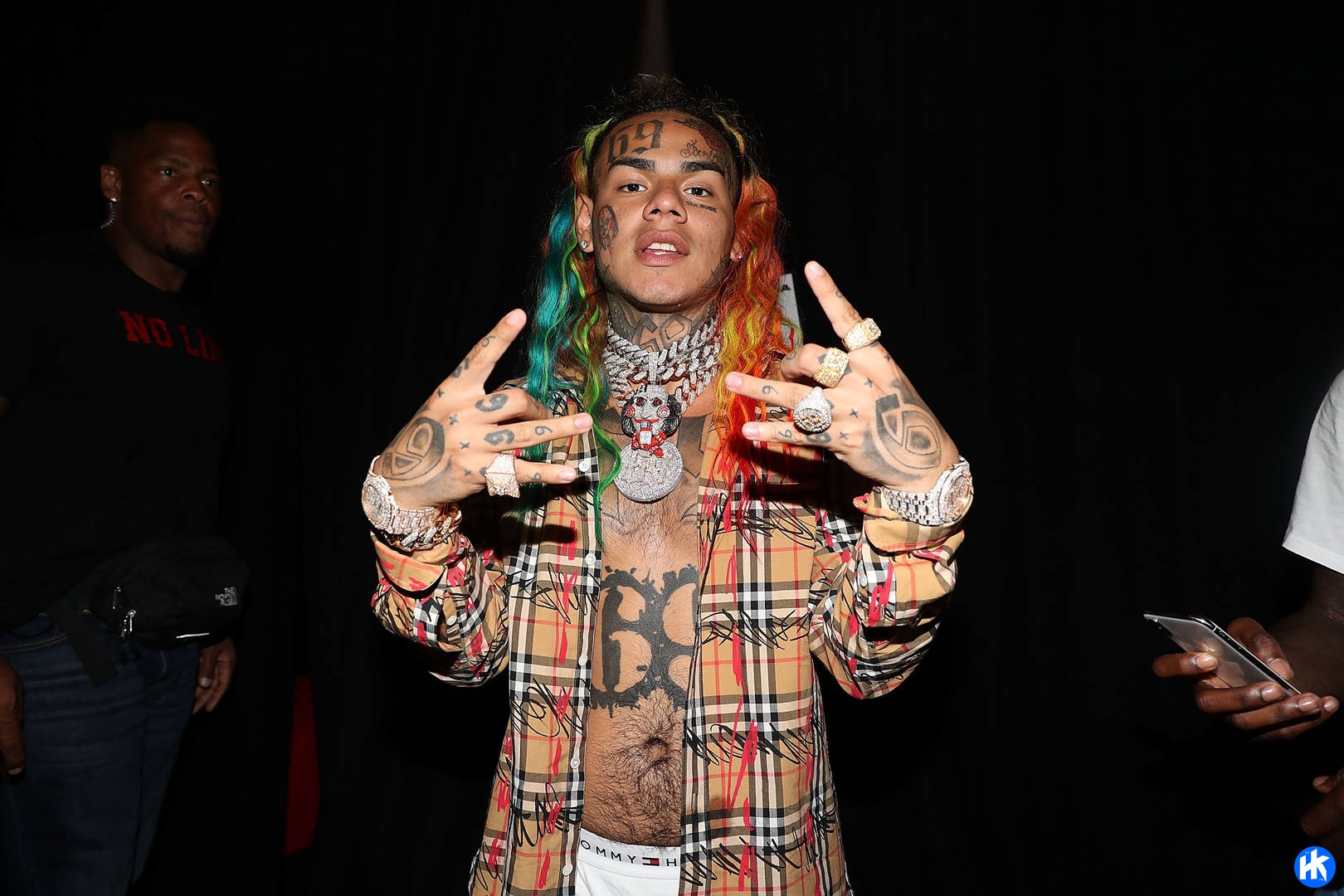 6ix9ine was originally facing a minimum sentence of 47 years after being arrested on racketeering and firearms charges, as well as a series of violent crimes and trafficking offenses, alongside five other individuals part of Nine Trey Gangsta Bloods, including former manager Kifano "Shotti" Jordan. In an effort to reduce his time, 6ix9ine cut a deal with prosecutors, pleading guilty to the crimes committed, while admitting to being part of the Nine Trey gang, detailing his involvement in the robberies, assaults, drugs, and attempting to provide insight on the in’s and out’s of the gang.
In his testimony, the New York native revealed that his main role in the Nine Trey gang was to "just keep making hits and be the financial support for the gang ... so they could buy guns and stuff like that."
From the end of 2018 to the end of 2019, the trial was widely publicized with many sharing their opinions on whether or not 6ix9ine should be ostracized for making a deal and testifying against his former gang.
During the course of the trial, many celebrities voiced their opinion on the case. Durk was among them, tweeting, "F**k 69 snitch K," in September of 2019, which has since been deleted. Other celebrities like Meek Mill, Snoop Dogg, Offset and more also took to Twitter and Instagram to throw shots at 6ix9ine.
6ix9ine's Social Media Antics 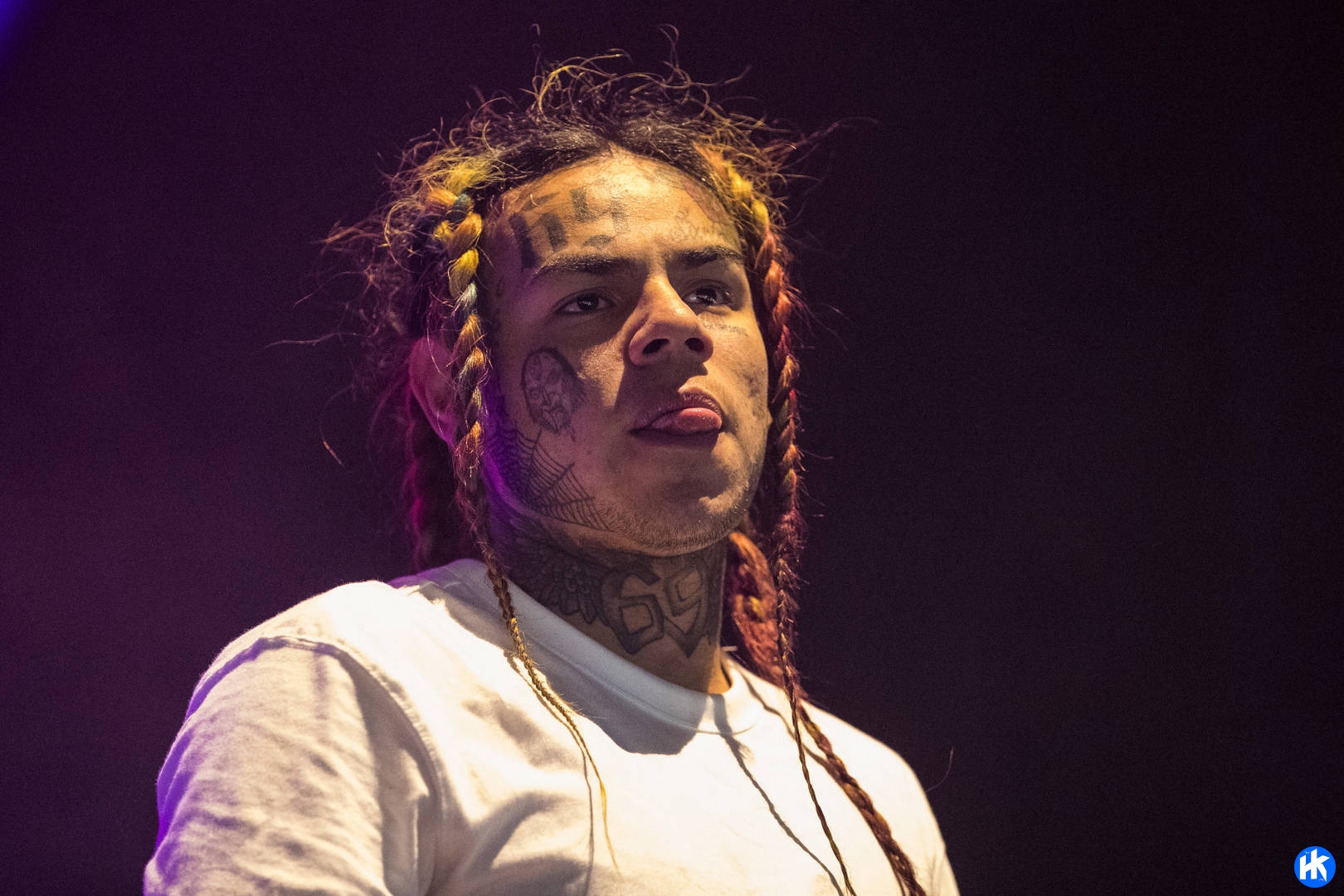 Once the pandemic broke out in March 2020, 6ix9ine was able to leverage it to his advantage, earning himself an early release just a month later, in April 2020. Once he was out, he worked on resuscitating his music career.
The rapper released "GOOBA" less than a month after his prisone release, before popping back up with "TROLLZ," featuring Nicki Minaj. Following the success of his collab with the Rap Queen, 6ix9ine took to his Instagram and started firing shots at those who had been clowning on him. Before name-dropping a bunch of rappers who had never released a #1 Billboard hit, including Future, Meek Mill, Gucci Mane, Trippie Redd, G-Herbo, and of course, Lil Durk, 6ix9ine went on to congratulate himself, calling himself "number one" in the world.
When the long list of rappers 6ix9ine mentioned failed to retaliate, 6ix9ine took matters into his own hands, zeroing in on Durk and antagonizing him further by sharing bringing flowers to the location where Lil Durk’s cousin, Nuski, was killed. 6ix9ine shared the Nuski tribute publicly of course, capturing the moment on video and writing, "CAME TO OBLOCK .. came to pay my respect to @lildurk cousin nuski who was killed by gun violence we need to change as a community #RIP NUSKI PRE ORDER THE ALBUM LINK IN MY BIO SEPTEMBER 4th."
In an indirect response, Durk announced that his new album, The Voice, would be released on the same date as 6ix9ine’s album. "THE VOICE SEP 4TH," Durk announced.
He then took to his Instagram Live advising his fans, "You can’t compete with a rat on the streets," reminding them to pay 6ix9ine no attention. In this same live video, Durk also claimed that someone from 6ix9ine’s camp allegedly tried to pay him $3 million to keep their beef alive. Durk clearly turned down the cash offer, sharing on an IG story later that "the trenches [are greater than] $3 million."
When September 4th finally came around, 6ix9ine dropped his album, and Durk did not. 6ix9ine took to his Instagram story and live once again, trolling Durk, saying, "Remember this goofy said he want all the smoke. Leave the smoke to Nuski #NUSKIPACK."
Durk responded to this by dropping his single and offering some sage advice for 6ix9ine after TattleTales sold 100,000 units less than originally projected. Lil Durk taunted him, saying he should have put some of that $3 million towards copping some album streams.
6ix9ine on Von's Death

In November of 2020, OTF’s King Von was shot and killed in a street altercation in Atlanta, Georgia. When DJ Akademiks posted the breaking news to his Instagram page, 6ix9ine reacted with a laughing emoji. 6ix9ine was similarly unkind on Durk’s IG post in response to Von’s passing. When Durk took to his Instagram to share a photo of King Von with the caption, "My twin gone I love you baby bro - D Roy !!!!!" 6ix9ine insinuated the rapper should kill himself, writing, "Nuski now von AND you still rapping go pick up a gun," followed by a bunch of laughing emojis.
Durk deactivated his Instagram account the day after Von was killed, and didn’t reemerge on the platform until December 2020, with several tributes to the late rapper, along with the announcement of his new single “Backdoor,” as well as The Voice, which was on pace to sell around 55,000 units in its first week.
Without wasting an opportunity to throw shots, 6ix9ine took to the comment section saying, "Used Von name for sales. Is NOT blackballed. has all industry support. 55k and his man was caught in 4K #KingVon REST IN PISS."
The Voice ended up only selling 23,000 units in its first week, triggering a response from 6ix9ine who said, "everybody in the industry posted this .. this what happens when u don’t got drake."
Durk ignored 6ix9ine’s comments, paying these hateful messages no mind as he continued to mourn the death of his close friend.
Their beef went silent for a little while until 6ix9ine guest-starred on DJ Akademiks Off The Record podcast in August of 2021. In the interview, 6ix9ine asks Akademiks to set up a fight between him and Durk. "Before you leave Miami, you call Durk and get him in the same room as me," he urges the host. "A head on with Durk in the bathroom right there. I’ve been doing that in jail. No cameras." However, no fight ever ensued.
Current Issues 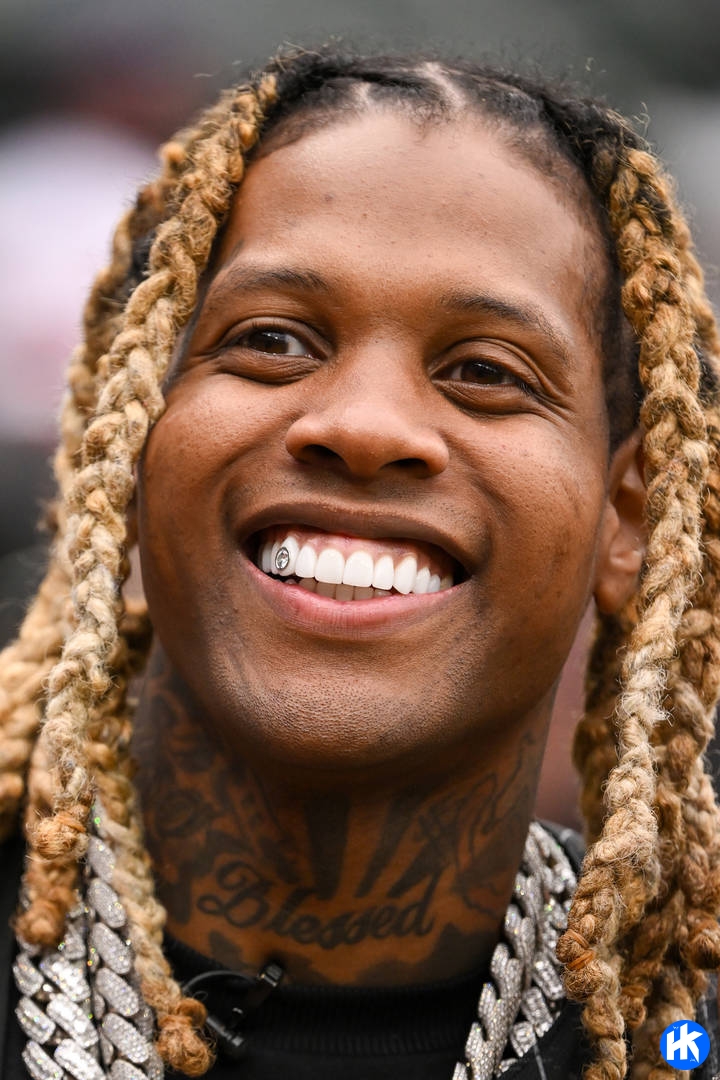 While Durk never responded to 6ix9ine's request to fight, 6ix9ine continues to rehash the beef every chance he gets, which brings us to his recent Instagram posts.
Just days after Lil Durk brought his lookalike, known as Perkio, out on stage in Miami, Perkio was seen looking very uncomfortable in a video posted by 6ix9ine. In the video, 6ix9ine approaches Lil Durk’s doppelganger to put a jacket on his back, emblazoned with a large image of the late artist, King Von.
6ix9ine captioned the video, "@lildurk I had a gift for the bro @kingvonfrmdao your n***as ain't never gon slide but they definitely rep you all day on tshirts."
Perkio later shared footage of his perspective from his run-in with 6ix9ine, revealing that the New York rapper actually "ambushed" him.
Durk seemingly reacted to the viral clip on Twitter by laughing it off, writing, "Broooooo I just not seen this shit today on the internet. This shit crazy, everybody calling and texting me. We went #1 again, thank y'all lol." Although 6ix9ine attempted to ruffle feathers with his filmed Perkio meet-up, clearly looking to stir some feelings in Durk with the King Von-emblazoned jacket, ultimately, he wasn't successful.
Since Durk continues to dodge the reaction 6ix9ine is looking for, it seems like this won’t be the end of their somewhat one-sided social media beef.