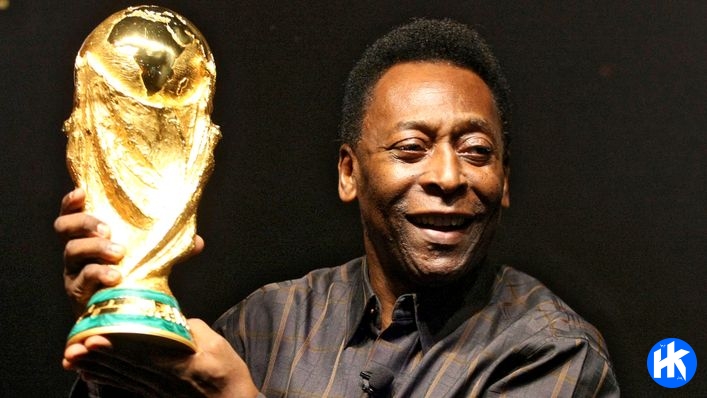 Three-time World Cup winner Pele has died at the age of 82.
The Brazil legend had been battling colon cancer in recent years and was admitted to the Hospital Israelita Albert Einstein in Sao Paulo in late November.
His family had been by his side over the Christmas period after he had been moved to palliative care.
Pele's daughter Kely Nascimento wrote on Instagram: "We are thanks to you. We love you infinitely. Rest in peace."
A statement on Pele’s official Instagram account said: "Inspiration and love marked the journey of King Pele, who peacefully passed away today.
"On his journey, Edson enchanted the world with his genius in sport, stopped a war, carried out social works all over the world and spread what he most believed to be the cure for all our problems: love.
"His message today becomes a legacy for future generations. Love, love and love, forever."


The Brazilian Football Federation posted a picture of Pele celebrating one of his many, many goals, saying "RIP Pele" alongside three crown emojis.
England World Cup winner Sir Geoff Hurst gave his personal tribute over twitter, saying: "I have so many memories of Pele, without doubt the best footballer I ever played against (with Bobby Moore being the best footballer I ever played alongside).
"For me Pele remains the greatest of all time and I was proud to be on the pitch with him. RIP Pele and thank you."
The legendary Brazilian striker scored 77 goals in 92 appearances for his country — making him the Selecao's all-time leading goalscorer.
Regarded as one of the finest footballers in the history of the game, Pele earned his first national team appearance aged 16 and went on to make his tournament debut at the 1958 World Cup in Sweden.
He netted twice in the 5-2 victory over the hosts in the final and also featured in Brazil's triumph in 1962 in Chile.
Pele lifted the Jules Rimet trophy for a record third time in 1970, again scoring in the final, this time in a 4-1 victory over Italy.
After spending 18 years with boyhood club Santos, the striker moved to New York Cosmos for a two-year spell before haning up his boots in 1977.


One of the true greats.

Football world in mourning as Brazil legend Pele passes away

Football world in mourning as Brazil legend Pele passes away